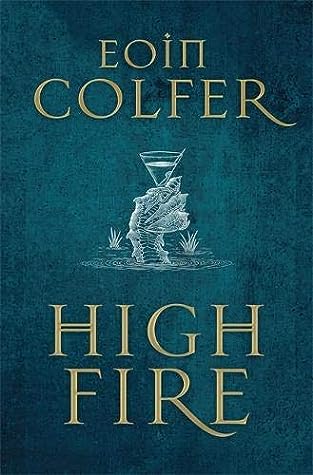 From  Goodreads: A hilarious, high-octane adventure about a vodka-drinking, Flashdance-loving dragon who’s been hiding out from the world – and potential torch-carrying mobs – in a Louisiana bayou . . . until his peaceful world’s turned upside down by a well-intentioned but wild Cajun tearaway and the crooked (and heavily armed) law officer who wants him dead.

Squib Moreau may be swamp-wild, but his intentions are (generally) good: he really wants to be a supportive son to his hard-working momma Elodie. But sometimes life gets in the way – like when Fake Daddy walked out on them leaving a ton of debt, or when crooked Constable Regence Hooke got to thinking pretty Elodie Moreau was just the gal for him…

An apprenticeship with the local moonshine runner, servicing the bayou, looks like the only way to pay off the family debts and maybe get Squib and his momma a place in town, far from Constable Hooke’s unwanted courtship and Fake Daddy’s reputation.

Unfortunately for Squib, Hooke has his own eye on that very same stretch of bayou – and neither of them have taken into account the fire-breathing dragon hiding out in the Louisiana swamp…

For Squib Moreau, Regence Hooke and Vern, aka Lord Highfire of Highfire Eyrie, life is never going to be the same again.

First up, thanks to Jo Fletcher Books and Netgalley for my review copy of Highfire.

As a child, I absolutely adored Eoin Colfer’s Artemis Fowl series. It was so funny, so smart, so quick, and it absolutely hooked me while often making me howl with laughter. To this day, it’s still one of my favourite series. So I was delighted to find that Colfer was bringing out an adult fantasy novel for the very first time.

From the very first page, I got the sense that this would be unlike anything else I’ve ever read before. I know I say that a lot on this blog, but with Highfire I really really mean it. The novel is about an alcoholic dragon wearing a Flashdance t-shirt, for crying out loud. It’s certainly a memorable book. And I have never seen another one quite like it.

The same humour that I found in the Artemis Fowl books all those years ago [trust me, I don’t even want to think about how long ago I first read them because it makes me sound old] is stark across every single page. There’s lots of quippy lines, read-between-the-line jokes, and just funny happenings and situations. The action is made all the punchier for it because the humour really lends voice to the characters. Even though it’s in third-person, there’s a lot of narrative flair to this book. While I think anyone who loved the Artemis Fowl books will find this appealing, I will say that it is a very very adult book. There’s lots of profanity, talk about drugs, violence and mentions of sex. So you might want to consider that before buying it for a kid, or reading it in plain view on public transport :’D

To be honest, this helps a lot with the plot. If we’re being blunt, not a whole lot happens in it. But then, this is actually something I came to love about Highfire– it isn’t a fantasy book that deals with impending world destruction or giant-scale wars or kingdoms that need rescued. It’s a very small affair. Set in Louisiana, the book is really just about the characters doing their own thing. That’s not to say that nothing interesting happens, of course. There’s quite a bit of fighting and life-impacting stuff that unfolds over the course of the narrative, but, while there are some high stakes at times, it feels geographically focused and more… idk, down to earth? I know, it’s such a bizarre thing to say about a book like this, but there’s just something about its small-scaleness that seriously appealed to me. It was so refreshing. Not to mention it was hilarious trying to imagine a dragon living out in the Louisiana swamp.

As with all of Colfer’s oeuvre, the characters were very well developed. I came to adore Squib and cheer for him every time he appeared on the page. And while Vern was prickly, by the end I just wanted to hug him. I imagine the humour went a long way to making these characters likeable, but there’s also a lot of nuance to both of them and there were some serious, interesting backstories and things that balanced the jokes nicely.

I will say that the story wasn’t an immediate hook for me, and while it had a lot of stuff going for it, it missed a lot of the action and fast-paced moments I was hoping to see woven into it. As I said earlier, I do appreciate that the stakes managed to be legitimately high while also small-scale, but I could have done with a touch more action. There were definitely chunks of the book where I found it reasonably easy to put down, and the middle was a tad saggy. There are some high action moments, but there was also maybe just a smidge too much of a lull between them.

Overall, I’d give Highfire an 8/10 stars. I thought it was an utterly unique fantasy story, and I really have nothing to compare it to. The humour was as amusing as anything else Colfer has ever written, and you can definitely see his writing style shining through. But I do think the pacing lagged at moments, and it took a while to hook me and make me determined to keep reading.