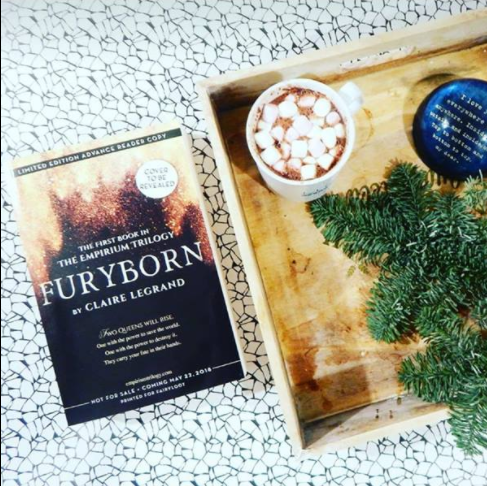 The world will fall. Two Queens will rise. One of blood. One of light.

When Rielle Dardenne foils an attempted assassination on her best friend, the crown prince Audric, she inadvertently exposes the secret her family has been keeping for most of her life: she is able to perform all seven types of elemental magic. The only people capable of such a feat are two prophesied Queens, but nobody can prove which one Rielle might be. With the government of Celdaria afraid that Rielle might raze their kingdom to the ground with her out of control powers, they offer her a way to prove she’s the saviour Sun Queen. All she needs to do is complete seven deadly trials to test her magic. If she fails, she will be executed, but there’s every chance Rielle might not even survive the trials.

A thousand years later, the legend of Queen Rielle is a mere fairy tale to Eliana Ferracora. Known as the Dread of Orline, she stalks the streets as a bounty hunter, rounding up Red Crown rebels to execute. Eliana believes herself to be untouchable, but then her mother vanishes without a trace, along with countless other women in their city. To find her, Eliana joins forces with a rebel captain on a dangerous mission, discovering along the way that the evil at the heart of the Undying Empire is more terrible than she ever imagined.

Two worlds. Two women. Centuries apart, they both fight in a cosmic war which has waged for millennia. When their stories intersect, shocking connections between them ultimately determine the fate of the world– and of each other.

I’ve just now finished the final pages of Furyborn and all I can say is OH MY GOD. When I got this book as an ARC from Fairyloot back in November, the thought never crossed my mind that I might be holding my new favourite book in my hands. I put it away on the shelf, got lost in my staggering to be read pile, and never gave it a real second thought until I saw the release date and figured I should at least read it before then. After all, I have heard amazing things, and I was curious to see if I agreed with the hype.

At first, I didn’t. The prologue was confusing and jarring, offering up a lot of fantasy world jargon that made no sense to me. I frowned my way through it, wondering if it was maybe going for that ‘you’ll understand this later’ punchy pace thing of throwing you in the deep end and rescuing you later, or if it was just leaving readers to sink or swim. I approached the next chapter with caution, and found myself even more baffled to discover that, although the prologue is Rielle as an adult, this chapter was set when she was a child. Um, what? It was pretty jarring, and for a while I put the book down, feeling a touch disappointed, but ultimately I decided to keep at it, and dove back in.

And thank God I did, because honestly I never would have realized how good this book would be. Again, I felt the alternating chapters between two seemingly unrelated points of view a little hard to wrap my head around, mostly because I’d read the synopsis of the book and I was impatient to find out the connection and how it worked across such a vast time difference. But honestly, the characters became so compelling that I couldn’t help but fall into this world, heedless of the confusion. Rielle is headstrong and stubborn, but there’s something vulnerable about her and I loved hearing all of her thoughts as she struggled with the trials she’d been set, and her very conflicted friendship with Prince Audric, and his betrothed, her other best friend, Ludivine. There were some stunning moments between them all, and I found myself combing through the book, hungry for more.

Even more compelling though, was Eliana’s character. For a start, her brother Remy is simply adorable. And secondly, she was totally bad-ass, and not always in a good way. She provided one of the best examples of a conflicted and multifaceted character I’ve ever seen. If you’ve read some of my reviews before, you’ll probably know by now that I’m a big fan of antiheroes. Give me an Artemis Fowl or a Kaz Brekker type any day of the week, and I’m happy to read everything you set in front of me. Eliana provided exactly that. She’s a bounty hunter, and she regularly does some very sketchy and violent things for money and her family’s safety, and because of this she was fascinating to learn about. I never knew what she would do next, whether she would betray the rebels in order to keep Remy safe, or if she would kill her old bosses to make sure they never came looking for her again. She’s one of those who clearly feels very strongly about the monstrous things they’ve done though, so it wasn’t too hard to sympathise with her or to find her a very likeable character. Legrand does a phenomenal job of balancing her character so she never comes across as too dark, or too beyond saving. And I think that’s what really makes this book work.

The world building too, was nothing short of masterful. I devoured every scrap of knowledge about the magic system in Rielle’s world, and I smiled every time I learned something new. The descriptions, the scenery, the intricate settings, I haven’t seen anything quite this good in a long while. The pacing ticks along nicely, and though there are obviously moments when it doesn’t so much roar as zips along, but hey that’s exactly what I want from a book. It dips into brake-neck speed on occasion, and I grabbed on for dear life during those terrifying moments, screaming ‘don’t kill my babies’ but that’s also what I was hoping for. There were no moments when I was eager to get off the ride, or when I was wondering when it would be over, and for that I am deliriously happy with Furyborn. It’s done exactly what I want in a fantasy book: it has enchanted me, it has cost me sleep, it has made me frantically worry if my faves will survive, and it has made me desperate for the next book in the series. The closest character and world-wise I can compare this to is Sarah J. Maas’ Throne of Glass series, and there’s some plot likeness to the Queen of the Tearling series too, but this book stands fantastically on its own little pedestal. I’m sure, by the time it is released, we’ll all be worshipping at the feet of that pedestal, waiting for Claire to draft our future tears, as she’s so kindly phrased it on Twitter.

Thank you so much to Source Books and Fairyloot for including this ARC in the November box. For those of you who didn’t manage to snag a copy before the release, it’ll be out in stores on May 22nd. If you’re in the UK, you can preorder a copy from Amazon here or Book Depository here. Keep in mind that this is tipped for one of the biggest YA releases of the year, so don’t be surprised if it also crops up in book subscription boxes closer to the release date too.

One thought on “Furyborn Book Review”